Its again a news about the release of the Visual Studio 2013 RC for developers where SomaSegar, Corporate VP has announced in his recent blog post today. With this release you can go ahead and download the latest version of Visual Studio and install parallel in the machine which runs Visual Studio 2012 and earlier versions. This release is not specific to the MSDN subscribers rather its to the public who can download and start using it right away. Yesterday we saw the blog post on Windows 8.1 RTM release which has a greater impact to the developers in response with targeting the app development to the newer version, Microsoft has announced VS 2013 RC which provides more advantages to the developers.

Microsoft is expected to release the final version of the Visual Studio 2013 in Mid November 2013 worldwide through MSDN/Technet and to the public subscribers. Visual Studio 2013 is expected to have a lot more features for the developers which we will explore more in our upcoming blogs. As a quick look around we can see a few improvements in terms of the XAML coding for developers, New templates for quick development, C++ aliases, Intellisense for Typescripts, Codelens, Workitem charting and few more.  The download of Visual Studio 2013 RC is available in multiple forms as per the requirement as 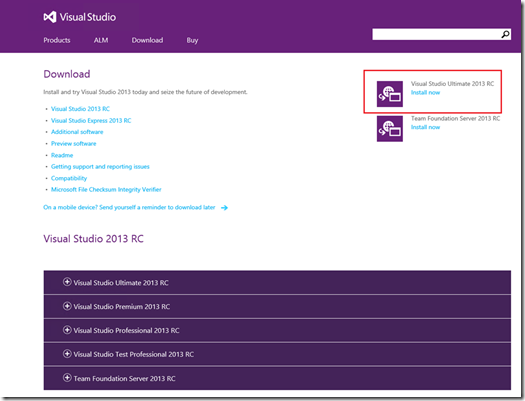 Note – Join the Visual Studio 2013 launch event on November, you can register for the launch using the link http://events.visualstudio.com/

Karthikeyan Anbarasan (Karthik)http://www.f5debug.net
Karthikeyan Anbarasan, Microsoft MVP (Most Valuable Professional) in ASP.NET/IIS Architecture. He is the Founder and Chief Editor of the www.f5debug.net website and has authored books on Windows Phone and Business Intelligence(SSIS). He is also a Passionate Speaker and a Blogger on Microsoft Technologies.
You must be logged in to post a comment.
Next Post
How to add existing folder or directory to Visual Studio Project Solution