Friends first of all Happy New year 2015, on this new year I am starting this series of tutorial to discuss about the latest release of C#.Net and what improvements does it comes with. This series will cover all the new features and enhancements that are released with this version of C#. Microsoft is really focusing closely on the improvements of C# by fixing most of the know items and providing enhanced code. This progress provides developers a new look towards writing the code in a different way rather writing the lines of code each and every time. C# 6.0 is under CTP3 and to get your hands on you can download Visual Studio 2015 or installing Roslyn package to your existing Visual Studio 2013 version as well to get the updates.

C#.Net we normally term as the successor of VB.Net was first introduced in 2002 with as C# 1.0 with .Net framework 1.0 and Visual Studio 2002, later on with a successive release of the newer versions with enhanced features and improvements has placed the language in higher level for Microsoft to use across its products. Before this release of C# 6.0, if you see the existing versions and way Microsoft has taken C# for the last 12+ years its already a matured language with most of the much needed language capabilities are added. If we need to point some killer feature that has been released on each and every version of C# we can point few but with this release there is no specific one which can really be pointed, but still there are quite a good amount of new features and enhancements still shown. Below figure implies how C# has been evolved with the year of the release and major feature which can be termed “Killer”. 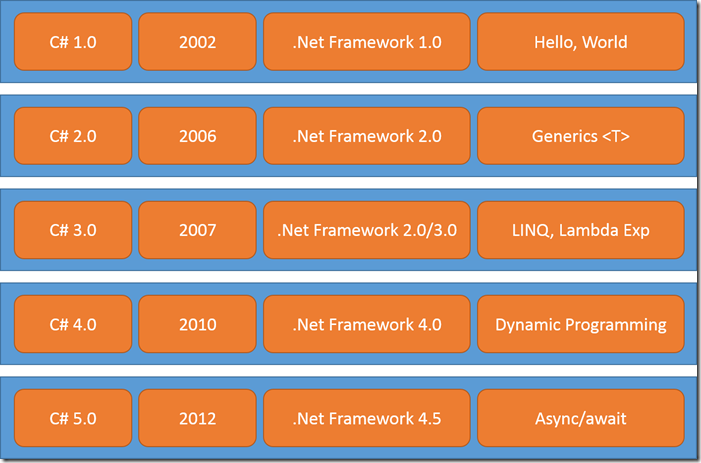 In this release there are quite a few number of improvements which we can be shown as a good note that Microsoft has taken the feedbacks from developers, but as mentioned there is nothing quite interesting or to term “WOW” with this release. Yes we need to accept to the fact that C# as a 12  year old product its already matured and the scope towards improvement is already limited with Microsoft already taking advantage on releasing every versions with major enhancements. Below is the list of new features that are released with C# 6.0, we will see each of the feature in detailed in this series.

Watch this space, we will link the articles on each of the feature to this space for the readers to get easy access to them.

Karthikeyan Anbarasan (Karthik)http://www.f5debug.net
Karthikeyan Anbarasan, Microsoft MVP (Most Valuable Professional) in ASP.NET/IIS Architecture. He is the Founder and Chief Editor of the www.f5debug.net website and has authored books on Windows Phone and Business Intelligence(SSIS). He is also a Passionate Speaker and a Blogger on Microsoft Technologies.
You must be logged in to post a comment.