Microsoft officially announced that Outlook 2013 RT will be a packaged part of the Windows 8.1 Preview which is expected to be released during build 2013 (June 2013). Outlook RT will be more functioning towards that few features that are available in the enterprise version will not be available in the RT version. Outlook RT in Windows 8.1 will have a live tile application with familiar interface and feature that is found in the Enterprise version of Outlook. Sources from Microsoft confirmed that Outlook 2013 RT can connect to Microsoft Exchange Server 2007, 2010, 2013 versions.   [more] 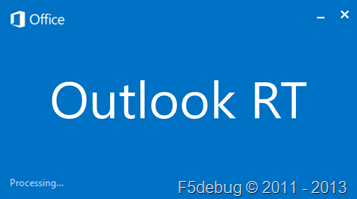 Tom Reller, Microsoft Chief Marketing Officer for Windows Business confirms that Outlook 2013 RT will be part of all Windows 8 upgrades both RT and pro versions. Tami Reller mentioned the below in an update from Microsoft

We know that the addition of Outlook for those using ARM-based Windows devices such as the Surface RT, Dell XPS 10, Lenovo Yoga 11, and ASUS VivoTab RT as well as new tablets to come in the future has been a popular request from consumers and businesses alike. As Tami said in her keynote address, we’ve listened and Outlook will be joining the other Office applications currently available on Windows RT, including Word, Excel, PowerPoint, and OneNote.


What is not Included in Outlook RT:

Once we upgrade our Microsoft Surface RT to the latest Windows 8.1 preview after the release during the Build we can get clear idea on the features and usage of the Outlook 2013 RT.

I think the admin of this web site is in fact working hard in favor of his site, for the reason that here every material is quality based data.|

I comment when I especially enjoy a post on a site or I have something to add to the discussion. Usually it's caused by the fire displayed in the article I read. And after this article . I was actually moved enough to drop a comment 😉 I actually do have some questions for you if it's allright. Is it only me or do a few of these responses appear as if they are coming from brain dead folks? 😛 And, if you are writing at additional social sites, I'd like to follow everything fresh you have to post. Would you make a list all of your social sites like your Facebook page, twitter feed, or linkedin profile?|

Normally I do not learn post on blogs, but I wish to say that this write-up very pressured me to check out and do it! Your writing taste has been surprised me. Thanks, very nice post.|

Fabulous, what a web site it is! This weblog provides valuable data to us, keep it up.|

What i do not understood is in fact how you're now not actually a lot more neatly-appreciated than you may be now. You are so intelligent. You realize therefore considerably in the case of this matter, produced me in my view consider it from so many varied angles. Its like women and men are not fascinated except it's one thing to accomplish with Girl gaga! Your individual stuffs excellent. At all times deal with it up!|

Pretty! This was an incredibly wonderful post. Many thanks for providing these details.|